Establishing a Promotional Review Committee Prior to Becoming a Commercial Organization

As of the first half of 2019, the Office of Prescription Drug Promotion (OPDP) at the Food and Drug Administration (FDA) had issued only three Untitled letters. The low number of letters issued by OPDP continues the declining trend seen since the most recent peak in 2010. The decline, in part, is due to the Agency’s weariness around issuing letters for violations that may be protected by the First Amendment and risk-based enforcement approach, focusing on clear violations impacting health and safety. In addition, a significant increase in guidance released by FDA, voluntary guidance instituted by Pharmaceutical Research and Manufacturing of America (PhRMA), and improved industry self-regulation has also contributed to the declining number of letters. 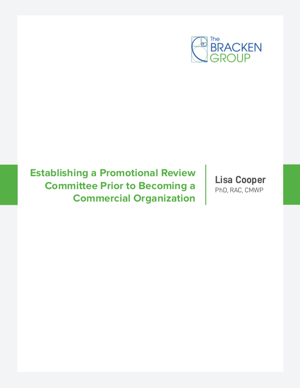 The first letter in 2019, dated 25 February was issued by OPDP to a Sponsor/Principal Investigator of an Investigational New Drug (IND) product, Sodium Acetate C-11. The offending website included several efficacy and safety claims for use of the unapproved drug as a PET scan agent for detection of prostate cancer.5 The promotional claims violate 21 CFR 312.7(a), which states:

“A sponsor or investigator, or any person acting on behalf of a sponsor or investigator, shall not represent in a promotional context that an investigational new drug is safe or effective for the purposes for which it is under investigation or otherwise promote the drug. This provision is not intended to restrict the full exchange of scientific information concerning the drug, including dissemination of scientific findings in scientific or lay media. Rather, its intent is to restrict promotional claims of safety or effectiveness of the drug for a use for which it is under investigation and to preclude commercialization of the drug before it is approved for commercial distribution.”