Dr. Victor Miranda, a physician who has built a career as a ground-breaking business executive, recently joined The Bracken Group. We talked with Victor about his many achievements and interests. 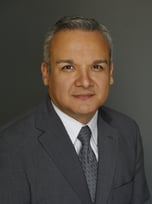 Q: Despite your education, you’ve never practiced medicine. Why is that?

A: I was thinking of doing pediatrics, but that was back in 1986, and managed care was beginning to take hold in the U.S. health care system. Under managed care at the time, a physician was required to see 40 to 80 patients a day. That’s not how I wanted to practice medicine, so I became a university professor. I taught anatomy and physiology, microbiology and biology. I did that for three years at Upsala College in New Jersey.

Q: And you continued your own education, as well.

A: The University of Wisconsin, Madison, offered me a postdoc in cardiovascular research, so I went back to Madison, which is where I had spent two of my undergrad years. But, I soon realized I didn’t have the personality to work in a lab. Ultimately, instead, I earned a master’s degree in Rehabilitation Counseling. The first class I took was taught by Edna Mora Symanski, one of the authors of the 1991 Americans with Disabilities Act.

Q: What was your first position outside of academia?

A: I was involved with the advent of Fosamax, the first drug to treat osteoporosis. Lunar, a manufacturer of bone density machines, hired me to train physicians on how to use them. A few weeks into the job, there was an international meeting on bone mineral disorders and my company and Merck unveiled their co-marketing effort. It was a bone density bus that would tour the U.S. and screen people for osteoporosis at no cost.

Merck Latin America decided that they wanted to do something similar, but there was no one at Lunar who spoke Spanish, knew the product, and knew how to talk to physicians. Except me. So at six weeks, I was plucked out of education and made the lead of the International Latin America efforts. I started with Argentina, then Brazil, Colombia, Peru and the Andean region. I went to Venezuela, Mexico, the Dominican Republic. Overnight, I found myself leading international conversations and international traveling faculties. That was the linchpin of my career. Everything took off from there.

Q: You recently retired from a prestigious role at 3M, correct?

Q: What sorts of projects are you likely to take on at Bracken?

A: Anything associated with clinical research, value-based care, market access, education, or reimbursement would make sense. I’m also interested in marketing claims and how to get to them. It’s fascinating to me that a lot of companies think they need to do a clinical study for registration, but they have no idea what potential outcomes they want to get in order to put them on the box and in the advertising campaign. Helping people get there has been a thrill for me. I also have a lot of experience in marketing and market segmentation and analyzing products and market segments to see if they're going to hit the mark.

Q: Do you have any interests outside of healthcare?

A: I love dancing, traveling, movies. I do all the Latin dances: salsa, merengue, cumbia, bachata, you name it. Not professionally, just for fun.

For more about Victor, see his curriculum vitae here.

In 2016, then-Vice President Joe Biden launched the Cancer Moonshot to accelerate progress against..

Get to Know Wil Reinus, M.D., Partner and Consultant with The Bracken Group

Dr. Wil Reinus, a radiologist recently retired from his position as Medical Director at ICON..